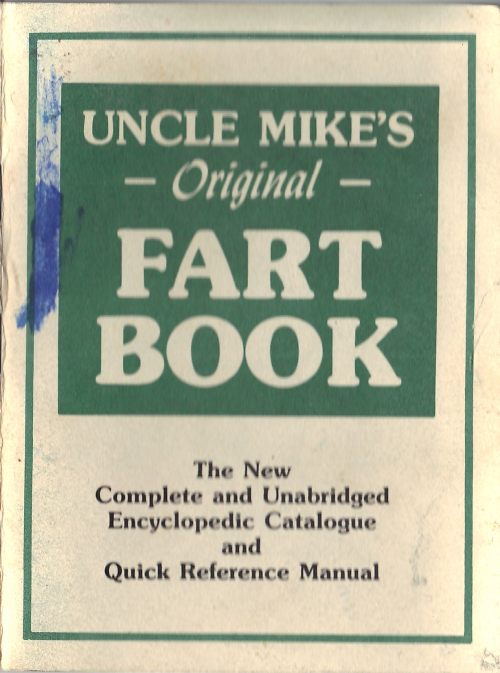 Since the dawn of time, man has been offended, relieved, embarrassed, tormented, impressed, and otherwise constantly accompanied by that ill-reputed, everyday companion commonly known as the fart.

By whatever local or family name it may be known, the fart is common to all people in all parts of the world; its presence is indeed international, ranging from pole to pole, reaching into the darkest, farthest corners of the globe.  Every place on the face of the earth, without exception, that is inhabited by man or beast is occasionally blest with that familiar song of a fart being born.

As far as longevity is concerned, the fart has indeed proven its stamina and staying power over the years.  There were, undoubtedly, farts in the Garden of Eden, just as there were farts during the Great Flood.   The decks of the great ships that explored the seven seas were the sounding boards for many a fart on the voyage to the New World.  Farts were heard during the American Revolution, as well as during the Civil War.  At Pearl Harbor, at Midway, at Iwo Jima, there were farts, just as the fart was present when the first rocket rose majestically from the pad at Cape Canaveral.  The fart was with us yesterday, it is here today, and it will still be around long after you and I have farted and departed.

Not only is the fart perpetual, it is also universal; it has no nationality, no religious affiliation, no race, no creed, no color, no sex, no age.  A Jewish fart is essentially the same as a Moslem, Christian, or Atheist fart.  A fart born in Africa is indistinguishable from one born in Canada, Puerto Rico, or Macy’s basement.  A Communist fart is identical to a Capitalist fart.  The fart is then, indeed, the common bond of man and beast.

Why then, since it is the common bond, has the fart been for so long pushed into the background and treated as a subject unfit for conversation or study?  Whatever the reason, the time has come at last for the fart to be brought forth into the light of day and examined for what it truly is.  It is the purpose of this book to explain, explore, and otherwise probe this fascinating phenomenon known as the common fart, for only by a thorough examination and understanding can the fart be truly appreciated for its own merits.

It is the author’s hope that, by using this book, the reader will be better able to realize and enjoy the fun that comes with that joyful bundle from within – that true and original for of self-expression – the fart!