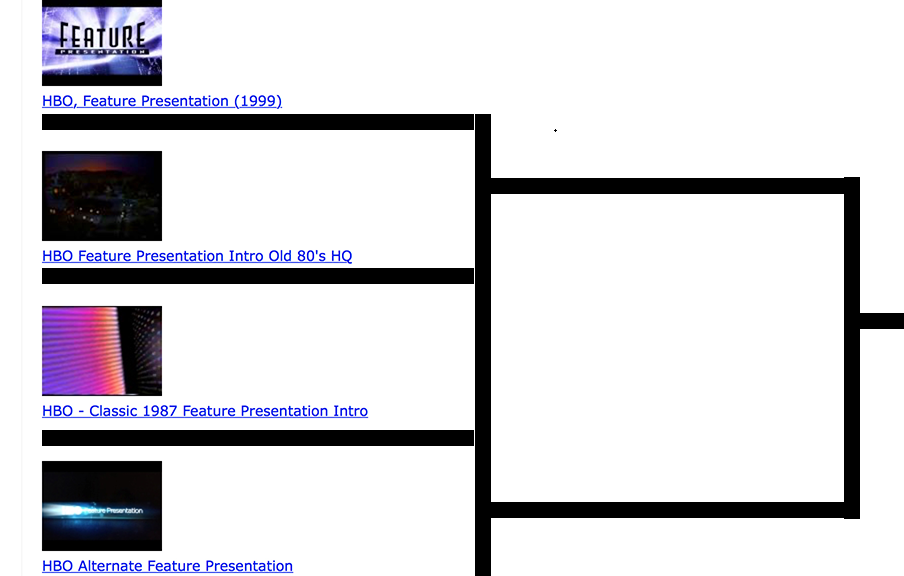 This is the one that started this wacky idea.  We we running our mouths on another epidose and had to re-live our love for HBO’s Feature Presentation.  So after researching some more on this guy, we discovered that we needed a play in just for HBO.  This is what you see before your eyes today.  Let’s do this:

This one is a call back to an older version that we will see here shortly.  It’s got a wider scope of travel.  It goes across the country and to the shores to bring you the HBO logo popping up out of the water.  The music is kind of subdued for this type of fanfare.  I wish it had a little more pop and sizzle.

Now speaking of pop and sizzle, we the one that started it all.  I gotta be honest it’s hard to beat.  So we start out from a living room and then fly across a city to reveal a flying HBO logo.  That’s when the music hits.  We started out a the beginning building up to the pop and now we a disco-y type jam and makes the alien logo fly around and gives a true fanfare.

This was the one that I most identified with as a kid.  You go from the fanfare of the alien to the hard rockin’ 80s hits of this one.  There’s lights, lazers, rainbow colors, and the hot neon drawing telling us it’s a movie.  I almost feel like I need to drink some Sunkist and snarf down some Fruit by the Foot while watching it.

To be honest, I’m not sure why we picked this one.  I think it was the Latin version or something.  Maybe it was to show that the main jingle is still there to this day but updated and brief.  Yes, brief.  That’s it.  It seems like we are in an era of shortened feature presentations and even HBO is victim to it.

So there we go.  I think we all know who will win.  But you never know.   Actually we do.  And if it’s different then it proves that the Internet just likes to ruin nice things.  On flip side it also means we are logging a bunch of visitors to the site.  So, game the system people!  Vote early, vote often, and Don’t Fast Forward!