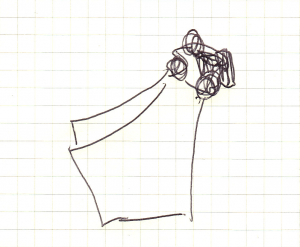 The hot, dry season in Texas, yes we only have one season down here, led me to a massive discovery that I now must share with you.  And my what a lovely opportunity as well.  Of all the searches of all the Googles, I’ve yet to find any information on this so it’s my job to show you what I’m talking about.  Oh, “What is it?”, you say?  It’s Booger Darts.

I have a booger problem.  By problem, I mean that anything that tickles my nose, I must get it out.  It could be rude and whatnot but when something tickles my nostril, I need to get it out.  It’s even gotten to the point where I would spend minutes digging into the very corner of the nose trying to get that one last chunk.  So I’ve developed some methods.

I could go on and on about all of my methods, but what I really want to talk about is one that I don’t think has ever been used before.  Right around the edge of my inner booger cavern is where some of the more pesky particles collect.  What I’ve found is that if I fold over a facial tissue to form a triangle, fold it the top corner over a little bit, and then curl it into a cylindrical tip, I could get enough in there to snatch every last bit. 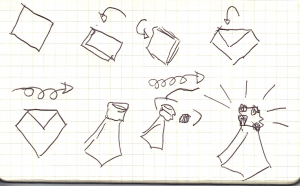 Yup, you just roll it up into your nose and twist and twist and twist until you get all that’s stuck in there.  It’s worked for me before and it can work for you.  So what can you do with the scraps?  Welp, that is why it is called Booger Darts.  It’s the perfect anti-office annoyance weapon.  This guy flings like a real dart and lands fairly well.

Okay so I don’t know just how well the darts fling because I usually toss them into the garbage.  I swear, though, that the trajectory seemed ripe for some well placed targets.  So I challenge to you whip out your favorite booger darts and see what you can get.  Maybe make a game of it, aye?  Targets?  How about distance?  I think this is the start of something grossly gonzo.