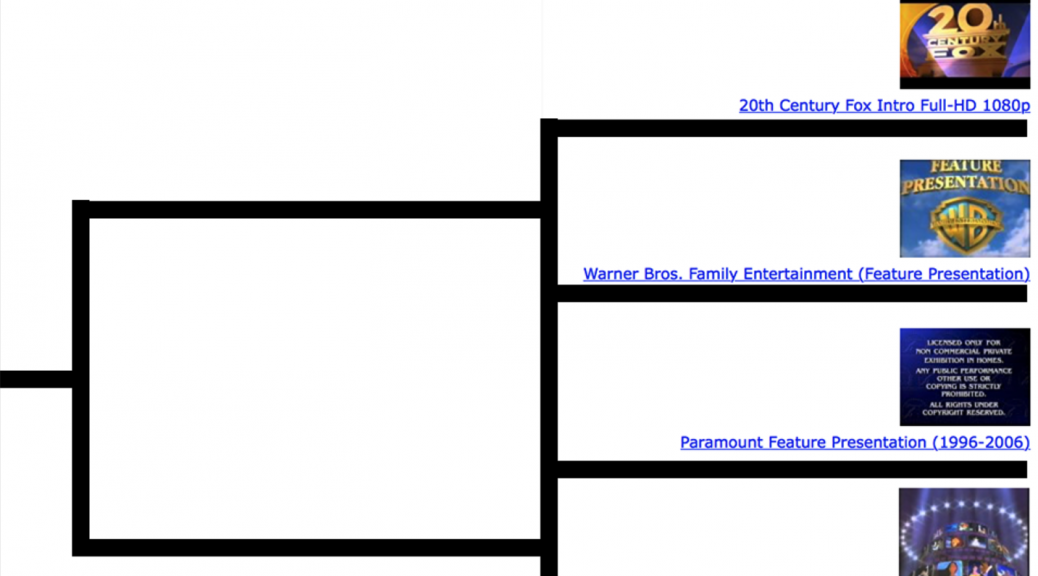 This week’s region takes us back to the movie studios.   After theaters tout their stuff, you usually get movie studios doing the same thing.  There’s a grand history of movie studio fanfare and we feel like we captured all the right candidates.  The bad boys of the studios, Disney, are back but they have some stiff competition.  Let’s take a look:

Everyone who’s been to a movie should be familiar with this fanfare.  The horns, the little build up, and then the epic horns all play into this classic feature presentation.  The drums give it a nice touch too.  We grabbed this one from the home entertainment division but it applies to all 20th Century Fox.  Although they are renamed to Fox Studios now.

So we really picked this one because it hints at the theme for the Looney Tunes.  Heck even Bugs Bunny pops up in this intro.  So it’s family entertainment and to honest we really didn’t see a Warner Brothers movie studio intro on the YouTubes.  Typically, though, the graphics blend in with the movie, like the Batman trilogy.   That said, we fully support and enjoy anything that reminds us of Looney Tunes

It’s unbelievable to think that this lasted so long for Paramount.  Can you blame them?  It starts out with a Southern swagger and the finishes with a tight punch after the voice over guy comes in an lays down the feature presentation speech.  It’s the most solid feature presentation in the tournament.

This is like finding that super expensive Magic The Gathering card and deciding to sell it instead of adding it to your deck.  Yes, that is a reference we pulled out of our ass.  We really are just drawing the similarities between the pagan subversiveness of a card game with that same pagan flavor of a giant movie studio.

So there we go, we have a solid bracket here on the movie studio side.  As always, you have  a week to vote and vote as often as you want.  We’ll post the results after the polls have closed as we slowly march toward feature presentation domination.  Now if you’ll excuse us, we gotta go catch up on some old Looney Tunes cartoons.