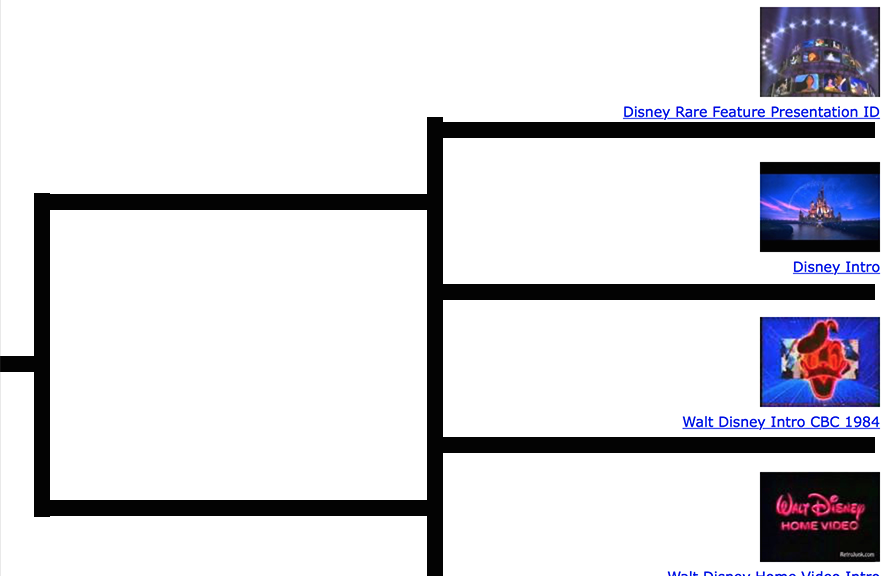 The Feature Presentation bracket is in full swing and this time we take a stroll down family entertainment lane. Disney is synonymous with the family as it’s taken over not only the stories that kids love, but also the stories that we as adults loved as kids (I’m looking at you Marvel and Star Wars). So it makes sense to have some sort of grand, boisterous intro into each carefully manufactured piece of family propaganda. It was hard to whittle it down but we have four that really show’s Disney’s teeth, and by teeth we mean fangs, and by fangs we mean soul vampire.

It says it’s rare but I’m not sure. You get the iconic castle but you also get to float on in. Once inside, you get a reminder of the history of Disney. From old to new, animated to real life (and mixed), you see just how deep Disney has its claws into traditional American culture. It’s rare and juicy indeed. No A-1 sauce needed for this Feature Presentation. Did you ever hear that Walt Disney was Nazi sympathizer? Just asking it is a odd little rumor.

When You Wish Upon A Star. It’s the song we all have programmed inside of us from almost day one. You hear here and are reminded of the fantasy of Disney and the wondrous story telling it brings. The iconic castle is a staple of this intro but this version makes it shine the best. The fireworks are a nice touch too. Though Disney is still evil.

Ah yes, the early 80s. Where technology and disco meet. You get it in full bore too. Seriously, it’s the most Tron version of the intro. You get snapshots of history as well, beating it into your memory and telling you it will never escape. The big plus here is you get a shot of a computer generated Epcot. Epcot was always about the world of tomorrow and with this intro you get to see that Disney will be here tomorrow and forever…in your dreams, nightmares, visions and waiting for you in the eternal afterlife.

We picked this one because of its simplicity. All you really see is Mickey Mouse in his most famous get up, that of the Sorcerer’s Apprentice, firing off a magic ball that turns into a simply Walt Disney Home Video logo. It’s the one feature presentation that we’ve seen that sheds all the brainwashing and tells you where you are at and what is coming up. Mickey the master of manipulation.

That’s the Disney Play-In! Go vote below and let us know who you think should win. We did our best to represent all that is Disney (PURE UNADULTERATED EVIL) with these short clips and the winner will go on to face some of the other storied movie studios on the bracket. Tune in soon for the next bracket leg as well as the results from this trip down Disney-approved memory lane.